Hi guys! I'm very excited to share the first chapter of Hunter's Revenge with you!
Hope you enjoy it :) 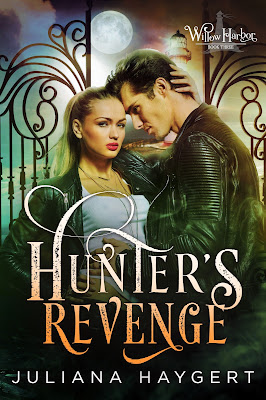 This was where he had told me about my first mission. Right here, seated on this bench, turned toward the center of the square, gazing up at the tall, majestic willow tree.
“You’re ready,” he had said.
I had been fourteen.
Now, nine years later, I was again on this bench—alone this time—giving myself a pep talk about what I had to do.
“I’m ready,” I told myself in a low voice.
But was I?
This would probably be the most difficult mission of my entire life.
Movement to my right caught my attention, and I snapped my head in that direction. Across the street, Mrs. Ackerman walked her ugly dog. She stopped at the bookstore’s window, gazed inside for a moment, then kept on her daily trek.
“There you are.” Aidan’s voice came from somewhere behind me. He walked around the bench and sat down beside me. “Here,” he said, offering me a to-go coffee cup from the Urban Grind.
I took the cup from him. “Thanks.”
We both looked at the tree while we sipped our coffee.
“How are you doing?” he finally asked.
I shrugged. “I’m not sure.”
The rage from last night withered my strength, and all that was left behind was a cold numbness.
He put a hand on my shoulder and squeezed. “I’m here for you. We are all here for you. You know that, right?”
I nodded. “I know.”
But he wasn’t. Not anymore.
“Nathan told me you were on your way to USC.”
“I was,” I confessed. “I am. I just had to make a quick stop first.”
“Quick. How long have you been sitting here?”
I glanced at my cell phone. Shit. “Over an hour.”
“Hm. So, are you going to USC or not?”
I sighed. “I have to. I need to tell her myself.”
“I know.” He nodded. “And are you ready for that?”
You’re ready …
“It doesn’t matter if I am. I have to do it.”
Aidan didn’t say anything, and I was glad. He knew how hard it was for me to admit my feelings, and since last night I couldn’t deal with any feelings right now.
We remained seated side by side for a few more minutes, drinking our coffees and looking at the tree. Every few minutes, someone we knew walked by and greeted us with smiles. Nobody here knew yet. And they wouldn’t, not until I told her.
Aidan’s cell phone rang. He fished it out of his pocket and glanced at it. “It’s Douglas. Hey, what’s up?” he answered the call. “Hm, okay.” He paused, listening to Douglas. “Okay. I’ll be right there.”
He ended the call and lowered the phone.
“Something wrong?”
He stood. “No. He just needs help setting up some things.”
“Isaac’s things?”
“Yeah, something like that.” He frowned at me. “Are you sure you’re okay?”
“I will be.”
He sighed. “All right. I have to go, but if you need anything, let me know.”
“I will.”
“And good luck.”
“Thanks.” I would certainly need it.


Landon nodded. “Yeah. Your father was killed by a demon.”